"The Nancy Ward" was time and space provided to me by Artspace in Peterborough Ontario. For a two month period I wonder the streets finding things to paint on, furniture, cardboard an Ice cream cone sign. One way or another everything ended up with "romantic" landscapes on it.

During this time there was a weekly "Cerebrate" or "poetry Slam" that was documented on both video and audio tape. during these evenings I would occasionally sing a song (watch video for sample) but mostly told an on going serial story" the future adventures of Black Betty" present as if it were a 1930's Radio Soap., local writers and actors also present there own work. 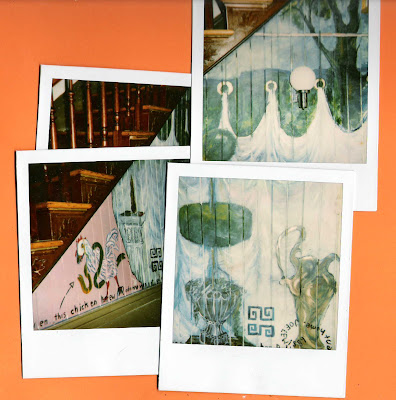 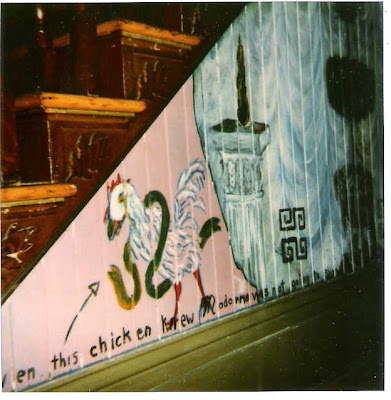 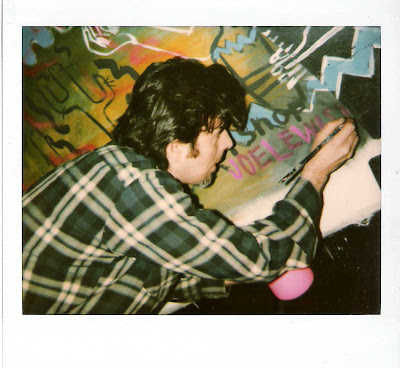 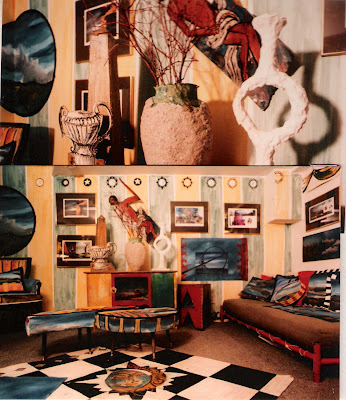 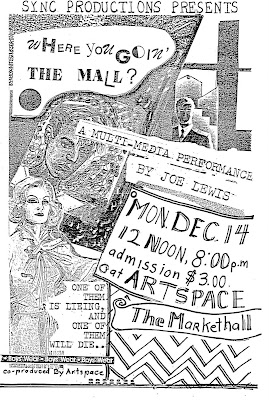 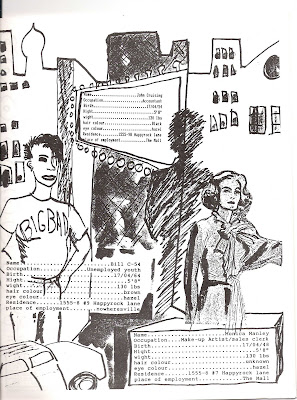 Where You Goin' the Mall ( multi media solo performance ) was originally created / presented at Mutli Cab 5 Regional Performance Festival at Artspace in Peterborough, Ontario in the spring of 1986, it was subsequently submitted and accepted by the Edmonton, Vancouver and Los Angeles Fringe Festivals (the LA performance was dropped and a "ode to Italy and Other poems substituted and after good advance media coverage, it didn't happen) (oh well, such is life) 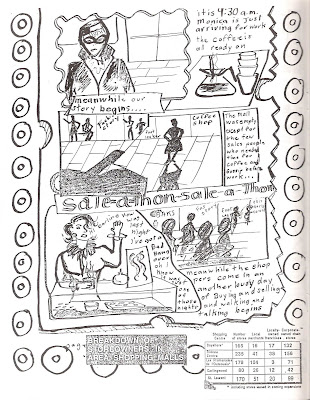 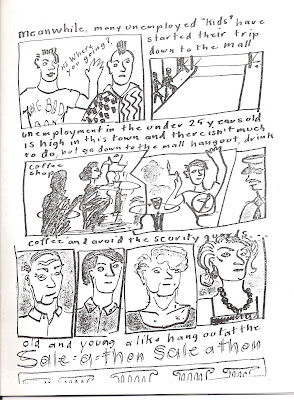 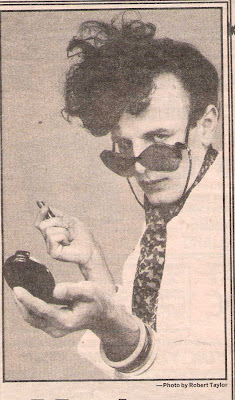 Joe Lewis in costume as one of his four Where You Goin’, The Mall? characters. However, only the changes in attire distinguished their personalities. (Monica Manly of Colour Your World Cosmetics)

Although billed as a multi-media performance, Where You Goin The Mall? does not entertain or provoke — or provide even remotely interesting viewing on any level. With slides blinking random newspaper clippings about shopping malls on three different screens, writer/actor Joe Lewis engages in a monotonous, seemingly off-the-cuff, monologue. The common thread is his erratic lecture-style musings about the sociological significance of mall shopping. It is not worth taking notes. During the course of the performance, Lewis disappears behind the screens for what seems an eternity, eventually returning as one of the four characters be plays in the Fringe production. The characters are essentially interchangeable, with only costumes to distinguish them. Lewis then continues his lecture to a totally baffled crowd. Most of the audience couldn’t fathom this one and made for the exit when Lewis conveniently disappeared behind his screens to change.
------------------------------------------ 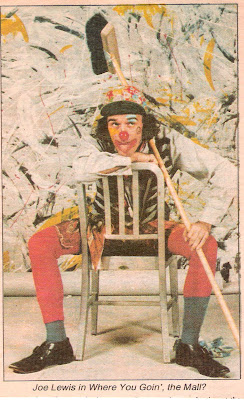 You’ve heard of performances? Well, how about an anti-performance? That’s what Ottawa actor- writer Joe Lewis delivers in this intentionally atrocious 40-minute mixed-media one-hander that may or may not be “a quasi- examination of information and how it’s presented

Lewis plays four characters — Monica Manly, a beautician; Bill C-54, “a comic-book character;” John Cruising, a businessman; Zap, a janitor turn clown. They each deliver utterly banal, seemingly off-the-cuff monologues while sitting before three running TV sets and three screens backlit with slides of paintings, newspaper clippings about shopping malls, a picture of Marxist theorist Walter Benjamin, slogans and a photo of a brick wall, among others. At one point, Lewis scatters balloons among the audience. Later he hands out advertising flyers. There’s talk about sex in mall washrooms and being videotaped by the police.

Actually, to say that Lewis “plays” these characters is to over state the case. About the only thing that distinguishes each character is the costumes Lewis changes into behind-screen. Throughout all this, Lewis’s rambling delivery remains flat, un- involving, off-hand; it’s as if he’s perversely determined to give the audience the worst possible experience of the Fringe, to tread that line between “boring” and “intriguing.” You won’t enjoy Where You Goin’, the Mall? But it’s awfully interesting, and interestingly awful, in its wilful refusal to entertain.
----------------------------------------------------------

Split Skits: some funny, some flat By LLOYD DYKK

At the Western Front, Ottawa’s Joe Lewis has a piece of performance art called Where Ya Goin’ — the Mall? It’s bland, vague and unstructured and that may be the point, considering the subject. The one thing it’s not that malls are is disorienting. You’re always aware that this is performance art.

There weren’t many shoppers there on Wednesday night — maybe eight people — but Louis was valiant. While slide project ions of malls in various states of activity flashed on three screens and videos played on two TVs, he portrayed four mall denizens:

Monica Manley, a salesclerk at a “color your life” cosmetics counter; Bill C52, a cartoon boy born at age 20; a straight man in the habit of frequenting wash- rooms for illicit purposes; and a janitor/part-time clown. None of these is as developed as you might hope.

The commentary was as rambling and flat-toned as mall life and seemed largely improvised. It’s a very loose show. Maybe the funniest and loosest thing Lewis does is hand each member of the audience a copy of Plain Truth magazine to riffle through while he goes behind the screen to get into another costume.

He’s likable despite everything. And he’s done some homework apropos of malls. One of the throw-away passages quoted on the screen is from the anthropologist Abrams: “The human animal has always required a central area to which others of his species can gravitate to exchange glances, boasts, confidences or protests.” 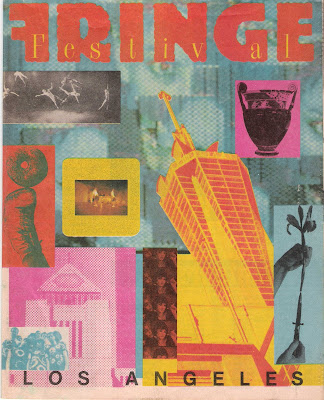 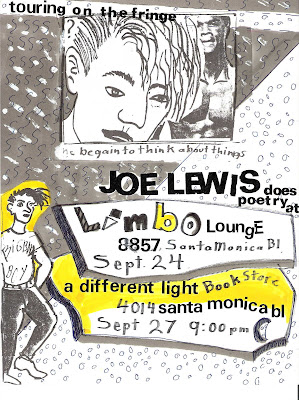 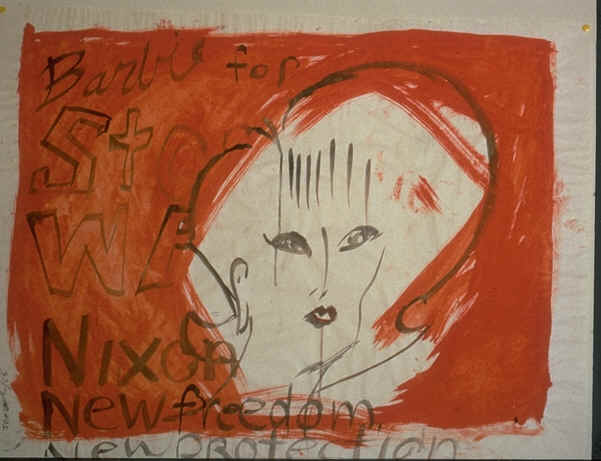 Artist uses Barbie do as symbol of female stereotyping

It was while thumbing through the toy section of a Sears’s catalogue that Peterborough artist Joe Lewis came up with the idea for THE BARBIE SHOW, an exhibit of paintings — not dolls — now on display at the Peter Robinson lecture hall.

When the former Trent University ‘student saw the rows of Babies dressed in a variety of outfits, he saw not an innocent children’s toy, but a symbol of what he calls insidious stereotyping communicated by the western media. So there are no ‘real” dolls in this show, there are only painted variations of the clean, blonde and blue-eyed plastic model of this supposed womanly ideal, a premise Lewis rejects absolutely,

Lewis’s art is sarcastic, iconoclastic, a little frantic, and theatrical, reflecting perhaps his experience in Toronto and Brantford theatre groups. He amuses, he provokes. On the surface, his work seems like one big, flamboyant hoax. But the narratives that deface the images, the messy symbols that crowd his cheap paper canvasses, contain a serious intent and a clear message.

Lewis has managed to incorporate everything that he thinks is threatening in this world into the image of Barbie. At first she represents the dumb blonde who has more fun. He develops a perceived link between stereotypical women whose proper place is serving men and a rigid, right wing society that supports Ronald Reagan, who is equated with the bomb.

The most powerful image, perhaps is the final one: a pampered woman wears diamonds in one magazine photo, and another woman’s hands are shown at the typewriter “ Typewriters are a girl’s best friend.”

The show continues into February largely for students who use the lecture hall. The public can see it Mondays and Thursdays from 9 to 11a.m. and Wednesdays and Fridays from 7 -10 pm
Posted by Joe Lewis at 9:30 PM 0 comments