With 10 jacquard woven wall hangings in a suitcase and picking up sticks and yarn to make a back strap loom to string up in a near by tree, or lamppost I will be wondering around the east cost of Canada in August into the fall. With a PowerPoint and the gift of gab (a genetic trait of my Scottish via the east coast roots).i am looking for invitations to hang my work, give a talk and meet guilds and other textile artisans. ( a couch to sleep on, a cup of coffee and ride to the next town perhaps.

Reality as of August 2 2015. My first east coast Pop Up exhibtion has come to an end and if likes and shares facebook and Twitter are to be interpreted in a positive light the show or at least my presence in Bonavista was noted. The location in which I exhibited was rather amazing. Like the former Joseph Simpson Knitting Mills. (1861 – 1947) on Berkeley Street in Toronto and the Canadian National Railway Station in Brantford Ontario (built 1905) it has a history of industrial/ mercantile use and as such has a high ceiling and a large amount of floor space with windows enough to let in adaquite quit light in a per-electric era. 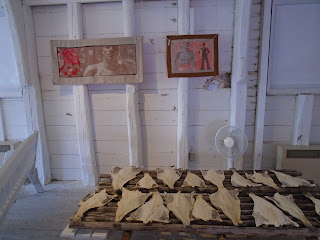 While my exhibition was a Pop Up the interpretative presentation of the processes involved in catching and processing cod is foremost in this space. While unmanned unless a tour group is coming through or a talk or some other presentation is being made I did have the chance to speak with visitors on the days before the official Art Walk event that was scheduled for the Friday evening of the week long Bonavista Church Street Festival​. I sat in on one talk giving by a Parks Canada employee for a group of American tourist. She spoke from first had experience of how the moratorium on cod fishing and closing of the Cod Fishery in 1992 effect the local economy, her own  her husbands job loss and subsequent leaving to find employment in Ontario and eventual return and becoming an employee of Parks Canada. The audience was extremely receptive and while there was a lot of personal information it was the "workers" voice inserted into the longer history of the Newfoundland and Labrador industry and the specific of the Ryans family business.


I need to thank a bunch of people for making my trip to the Bonavista Church Street Festival​ possible and the first would be Ruth Weller-Malchow​ of Bonavista Living & Bonavista Creative​ for inviting to participate in the Art Walk in the Town of Bonavista​ and these individuals without who's continuing support of my art it wouldn't have been possible for me to go.  Mary Alton​ David Bateman​ Doubledee Barnes​ Lou Ann DeLong​  Mary French-Pace​ Kris Lewis​ Becky Kelley​ Julie Kirkpatrick​ Piers Knight​ and Lana Rottenberg​   Barb Mcilquham​  Elaine MacNeill​  Jeremy Podeswa​ Michelle Walker​ and i know I am missing many others who have subscribed to the concept that buying art keeps artist alive and making.Next for me is "Strata-graphic Evidence::the textile work of Joe Lewis” interactive exhibition tour,, catalogue with on-line only component. Cheers until the next time I Pop Up..

While curated exhibitions in professional galleries add to ones resume the spontaneity of a Pop Up show is an equally viable way of building a reputation. Having been a painter who has become a weaver the portability of textiles makes this approach much easier if truth be told. With a one week exhibition scheduled in Bonavista NL the end of July beginning of August and friends scattered through out the maritime I thought I might as well see if I can arrange other exhibition opportunities.

The "Joe Lewis Itinerant Weaver" trunk show consist of 10 jacquard works woven at the Montreal Centre for Contemporary Textiles between 2003 -2011, it is 34 running feet/(10.3 meters) and easily hung. While my PowerPoint ramblings are as much story telling as "lecture" they have a thread of 5000 years of technical developments in weaving, a wide look at contemporary fibre arts or a an up close look at weavers / artist working with Jacquard looms to make their work'