Update From The Home Front 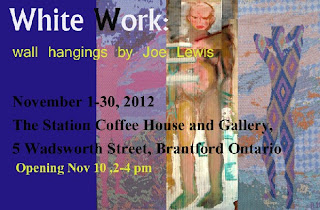 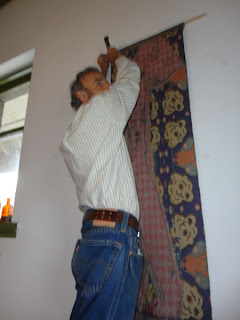 This is me putting up my exhibition in the Station Coffee house and Gallery at the Via Train Station in Brantford Ontario. Nov 1-30 2012. The show got good coverage in the local community newspapers and a nice write up in the Brantford Expositor by Arlene Laskey

7 Nov 2012 – The opening of “White Works,” Paris-born fibre-artist Joe Lewis's solo ... with the City of Brantford's arts and culture co-ordinator, Nicole Drake.
My opening happened on November 10th and was more family reunion then opening with 4 generations in the room. There is a creative strange running through it which includes an interest in textiles. in between hanging the show and having the opening the World of Threads Festival started in Oakvill and Toronto. I was in the The Variegated Threads exhibition at Queen Elizabeth Park Community and Cultural Centre 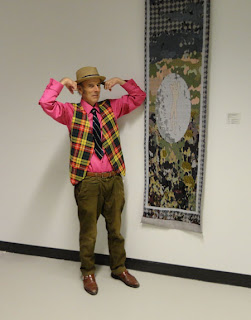 This is posing with my work in Variegate Threads. This pose i am striking is the standard competitive muscle man “front double biceps” pose and the reason I am striking is because in this piece entitled "Reflections on the Man in the Moon" there is a silhouette of a male figure striking the same pose. This silhouette is central to most of the pieces I have in my solo show  I have given the name “Mud Flap Boy”  and in a soon to be published catalogue cultural theorist and critic David Bateman says

" All of the gaps and differences between his own queer white past, and the coming together of aboriginal and contemporary iconographies (i.e. - the button blanket) give his work the raw, textured, subtly nuanced colours and narratives that render his ‘tapestries’ both queer and gorgeous."

These two appliqué pieces from an earlier body of work "Yukon Stories" should clear up his reference to "aboriginal ... iconographies"  and " button blanket" 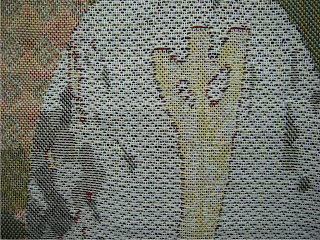 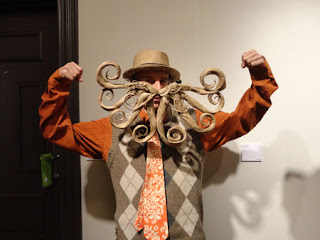 While I have had a solo show and have been apart of a group show this month I have also been to the 3O exhibitions in the last two months. Hear I am at the opening of Hard Twist at the Gladstone hotel posing behind one of  Keilley Stewart"s three versions of facial hair.. If you want to see other things I have seen you can check out these three facebook albums.

November 2012 Textile Sightings part two
You may notice a few changes on this blog with the addition of pages I can share more of what i do with you. so you might try following this blog and sharing it with others.