artist does stripe tease, not really I just gave a talk at the Hastings Fibre Festival 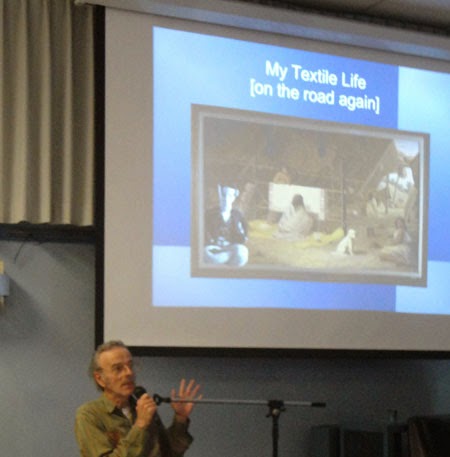 well I thought I saw just going to embed the facebook album of the talk but I don't seem to be able to do that today so I just putting a link to the album instead. (if you want to see the pictures)

After having attended this event since its beginning 5 years ago I was invited by its organizer Dr. Skye Morrison PhD to give a talk at this years event.

Textile Talk: A look at 10 years of editing an on-line magazine covering Textiles Crafts, Arts and history in Canada while being a maker, jacquard weaver and traveller to Textile conferences in the Canada, Europe and the US,


Imagine me sitting in your living room on a big comfy couch with a bottle of bourbon beside me and a bucket of ice. now sit back and listen. 45 minutes later I stop to take a breath.

The End
take a look at the album its easier or invite me over to sit on your big comfy couch
Posted by Joe Lewis at 7:46 AM 0 comments