Drawing at the Museum

On February 15 2018 a few days ago I made the suggestion on LinkedIn that you might sketch what you saw in museums and post a photo of that. rather then or along with a photo. So i begin today  ts about drawing in museums why doesn't that happen much its all Instagram and selfie. its nice to sit, look, draw 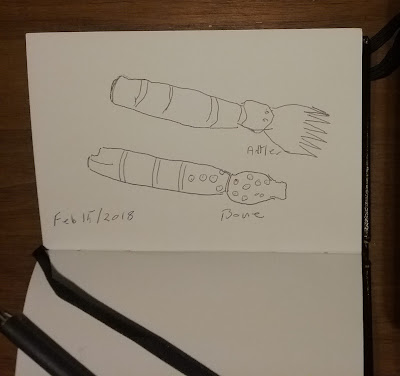 Feb 15 2018 i visited #vikingsto #VikingsTO at the Royal Ontario Museum again and decided to draw these two Weaving Combs decorated with lines and circle and dot pattern. The one on top is made from antler the one on the bottom is bone these are from the collection of the Historiska museet 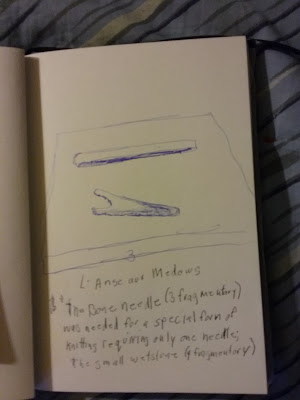 March 27 Norse women at L"Anse aux Meadows used tools like these in every day life... the bone needle (3 - fragmentary) was used for a special form of knitting requiring only one Needle" this text has annoyed several people i know because the technique known as Needle Binding, Naalbinding or Nålbindning is not named.
The Vikings exhibition on tour from the Swedish History Museum Historiska museet it is a collection of small finds ( and reconstructions of boats) presented in a number of different styles of display cases this lots of text and images to support the objects excavated from sites in Sweden (there are object from the Baltic and the Mediterranean telling of the range of trade) Most interesting to me are the number of artifacts related to textiles, production of and wearing of. There are a pair of scissors used for shearing sheep and 2 pairs for cutting yarn and cloth, 11 spindle whorls,in almost as many different materials including amber (+ one from L'Anse Au Meadow, Newfoundland And Labrador) and one Spindle Stick wood doesn't often survive) 5 ceramic warp weights. there are bronze needles bone needles big small and one broken (i don't know how many 12 i think) there are weaving combs. very small Weaving tablets 2 pieces of clothe some woven and braided gold, Then there are the ships, with twisted then braided rope and did you know they needed 200 Kilograms of Sheep's wool for making a sail for a sea going ship. The jewelry all worn with clothing.other then battle objects and carved stones most of this exhibition is related to textiles and personal adornment.there is even an ironing board and cloth smoothing rock

I did draw a bit of the reconstituted boat, here is the stern Boat reconstruction: the original is a grave find from Arby , Rasbokil, Uppland, Sweden, it is exhibited at the Historiska museet in Stockholm, reconstruction by Dr. Basil Greenhill and Owain T. P. Roberts, National Maritime Museum Greenwich, London Royal Museums Greenwich #VIKINGSTO Royal Ontario Museum

This a before and after series these sketches where done with watercolour pencils at the Textile Museum of Canada this afternoon March 27 2018  which next step Add Water! which i did on April 2th and returned to  the TMC.

April 12 tonight at the Textile Museum of Canada Susan Fohr gave the second of three workshops call The Slow Approach: Looking, Drawing and Making Together I was not able to attend either, but both last Wednesday and today. Last week i went in and drew during the day, and returned to spend time drawing while looking at some of the kimonos in “Artistry in Silk: The Kimono of Itchiku Kubota”. Using watercolour pencils and a ball point pen (drawing directly on the textiles with ink is part of the Itchiku process Kubota used in the creation of these stunning multiple Kimono panoramic landscape works ) I hope some of those who are taking the workshops will share some images of what they do.

If you want to more about The Itchiku Kubota Art Museum, Japan follow the link

April 5, a trip to the Royal Ontario Museum to look at fish baskets


On the same day I went from the Shreyas and Mina Ajmera Gallery of Africa, The Americas, and Asia-Pacific | Level 3 up to the 4th level to have one more look at the  #ROMDIOR in the Patricia Harris Gallery of Textiles & Costume | Level 4 exhibition before it closed  and did 2 drawings of one dress:  Rose France Autumn-Winter 1947 , (front View) Line: Corolle, occasion: Evening Dress, Atelier Floui Monigue, Mannequin: Paule , Textile: Silk satin by Marcel Guillemin et Cie. 975.297.2 gift of Mrs Kenneth Laidlaw Campbell

Wed. April 18. At the now free Daphne Cockwell Gallery dedicated to First Peoples Art & Culture | Level 1 at the Royal Ontario Museum. Since i was greeted by 3 young First Nations people who welcomed me into their space with a gift of tobacco i took the opportunity to ask their permission to draw a basket that i have visited many times since the gallery opened. They were gracious, thanked me for asking and told me i could as long as i showed it to them when it was finished. I did, they photographed me with the drawing (so its out there somewhere with or without a tag) and this is it.
I am drawn back to the Baskets in Shreyas and Mina Ajmera Gallery of Africa, The Americas, and Asia-Pacific | Level 3 Royal Ontario Museum