I have been dealing with other people's clothes most of my life. First it was hand me downs simply because of the size of my family and the rate of growth of my older siblings. At the age of 7 I put my spiritual life at risk and joined the Cub Scouts. I was Catholic and the meetings were in the Protestant church, and it didn't fall down around my ears as one nun from school suggested. She was my music teacher and choir master and did not want me distracted from singing. I really joined so I could hang out with my best friend who went to a different school but we sat with each other on the school bus. One day he was on his bike and got run over by a transport truck.
“ Great green gobs of greasy, grimy, gopher guts, mutilated monkey meat, toasted ...” as one of my brothers sang while another described the imagined clean up, neither being aware of our friendship and simply doing it because they were boys and nothing like that had happened in our lifetime. A few months later his mother gave me his Cub Scout uniform because my mother assumed she knew we couldn't afford one, I think she gave it to me as a memento-mori. I wore it once and was told to take off the badges I hadn't earned. I never wore it again except in a parade a few months later badges and all. I left it intact because that seemed the right thing to do. 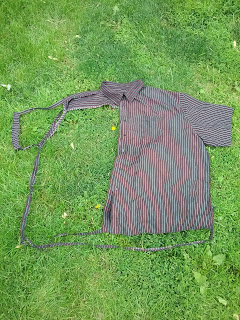 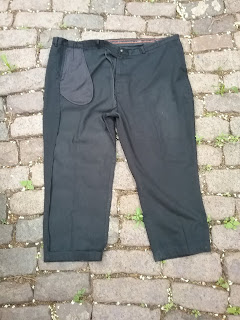 Great green gobs…as a teenager I made an income buying and selling vintage clothes some very posh suits I recognized as belonging to older gentlemen of the parish who were snappy dressers. You can't find suits like that at Value Village nowadays. When my father passed away I was given / took his newest shoes, a pair of classic brown brogues, one in perfect condition the other showing wear. My father had a wooden leg. I painted the perfect one gold and they were more often a display item, like bronze baby shoes, than worn. Both the Cub Scout shirt and the shoes were with me until I was robbed in 1987. 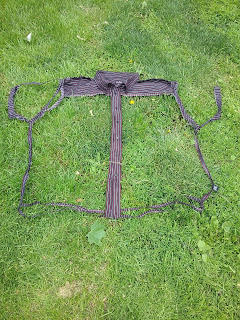 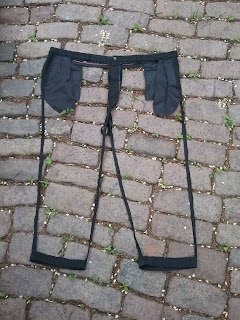 On the 5th of May 2018 my brother died, he had been born on 5th of May 1955 giving his passing an awkward kind of symmetry. A few months later his daughter in law got in touch with me his wife and his two daughters and proposed that some kind of family quilts could be made from his clothing. Each family member could have one and we could all work on them. She had gotten the idea from an episode of The Queer Eye. I was included in this conversation for the obvious reason that I am a textile artist. As arranged I picked up the clothes, 4 shirts and two pairs of pants and proceeded to dismantle them and cut the cloth into 4 ½ inch squares. At this point the story/ quilts remain stacks of 4 ½ inch squares. Almost and not quite.


When it came to cutting up my brother’s clothes I was struck by the thought of doing so methodically and documenting the process, which I did with one shirt and one pair of pants. I cut out panels one at a time then lay them flat and photographed them: the shirt on grass and the pants on cobblestones. It seemed the right thing to

The Text, 9-Patch quilt square and print were created to be in a community installation and catalogue project called "Worn Worlds" May 30- June 7 2019. It was part of Canadian weaver/ artist Line Dufour's 2018 -2019 John Willard Residency at the Art Gallery of Burlington, Burlington Ontario