My Family Line Stitched (a heritage of textile knowledge)


This was a photo album I posted on facebook on February 12 2010. on Friday October 12 2012 I met with repercussions of public life via facebook. 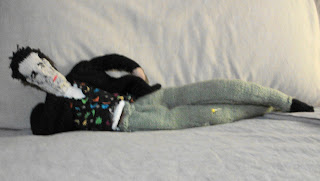 This photo of Knitted Joe reclining  was the last image in "My Family Line Stitched (a heritage of textile knowledge) and carried the caption "I am exhausted need a nap" some how it seems appropriate to start this post with it, read on you'll understand why.

On Friday October 12 2012 some one reported a photo I had posted over two years ago that they decided violates Facebook's Statement of Rights and Responsibilities and it was removed. I made a comment on that and re-linked the album it was from. Then another image from that album was reported and removed and I was banned from posting for 24 hours. That really means I can't get on period let alone post something. If a third images has been reported during that 24 hour time period then I am banned permanently and have no recourse that I can find. It appears another image has been removed even though I did get back into my facebook account at 9 pm on Saturday and change the security settings on the 147 albums 4362 photos for fear of further "Vandalism". I am still log in and working on coping all the information I have provided for those 4362 photographs. Names and links to thousands of people and events that it would be sad if not infuriating to lose.


" life with Joe was that his process of creation seemed to stem from the most banal features of daily survival; getting up in the morning, doing the dishes or being the brunt of a redneck’s homophobic outburst. And yet his work is the antithesis of banal. It jumps off the canvas, the paper or the rescued cardboard box and demands attention — to which some take offence. I remember once someone cut out all the penises from one of his collages, penises I had not noticed, being so subtly integrated into the piece. The work was eventually totally destroyed."

Unfortunately I am co-conspirator in this attack as I am in all of them because I have chosen to put my work out into the public sphere. I forgot what a dangerous place the public sphere is.

knowledge is supposedly handed down, grandmother teaches grand daughter to stitch a quilt square. or so the story supposedly goes 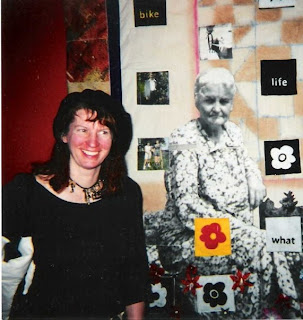 Carla A. Canonico ( editor of A Needle Pulling Thread" Hey Joe! What if we did a feature on your work? Choose about 5 of your works and you can write approx 100 words for each quilt/work? This one is quite interesting, what else can you say about it? 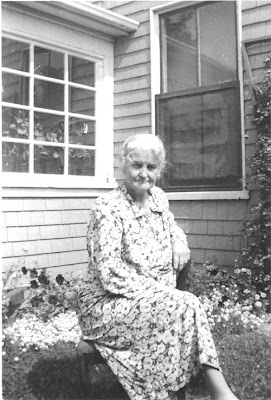 This is my paternal grandmother Grandmother Mary Anne Lewis (1883-1948) in her garden on Prince Edward Island. This is a person I never knew. if she knew how to sew i do not know. the assumption that she did could be made because of her generation and age, but that is just an assumption. 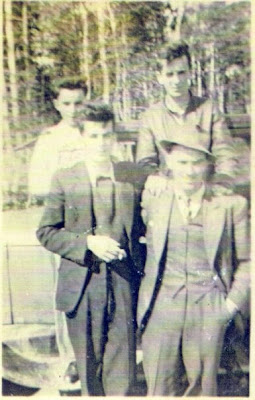 the man with the cigarette is my father. when I was a child he taught me to finger crochet, telling me this was how fishing nets were made down home (not out east) This was a man who could darn socks and weld. (the others are just a few of his brothers 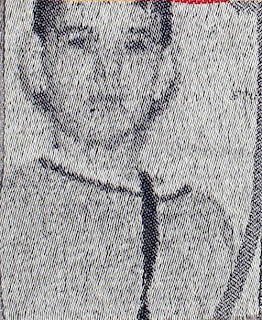 As a child I was artistic and I learned to do a number of thing like "Corking" and using pencils with long strings as a warp wove Hippy belts/ sashes for my self. 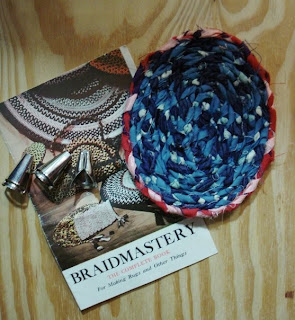 My mother showed me how to braid strips of cloth and running one twice down the stairs was enough for the "Welcome Mat" at the front door. I must have braided miles.

This next image was not in the original album  but it adds to the story of my textile influences I took this picture in my sisters house in May of this year. 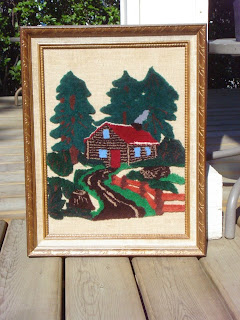 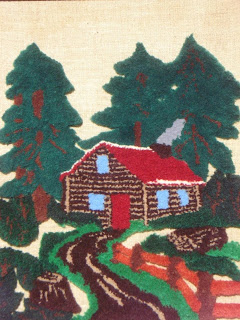 Betty Lewis, Punch hook rug ( picture/wall hanging) wool on Linen, cut pile, 1946 (47) it was done after Betty saw one made by her employer Mrs Graham who lived in the stone house at the corner of Capron and Grand River Street.  I have just got the story out of mom this morning and she went on to describe Mrs Graham's textile lifestyle as a weaver. hooker, and stitcher. Then went on to to tell me about the stair runner which was punch hooked with images on the risers . a rug in the den, and various other things. I want to find interior photographs of the place

now back to the original album 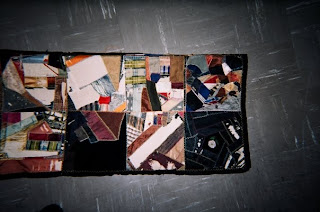 In 1996 while in Calgary I started working on what would become "Somewhere, Anywhere, Nowhere" a quilt in 5 panels. Starting with scarps of brightly coloured cotton cloth that where remnants from 4 panels of my deceased partners Aids Memorial Quilt. this photo is what i call a ghost of a "Crazy Quilt" possibly a family piece 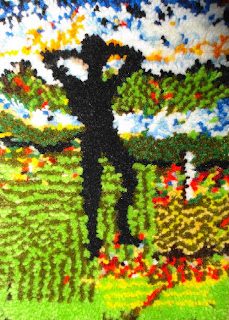 being from Paris Ontario the home of Mary Maxim supplier of fine wools from around the world, now the purveyors of acrylics and kits. I did more then one "latch hook" shag rugs. This is a much more recent one of "Mudflap boy standing in the landscape" Decades later when i started using textiles in my art it all seemed familiar some how. 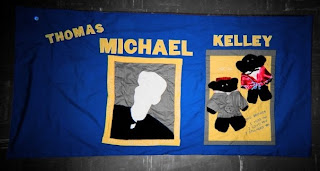 In a house which was full of textiles it was only with the assistance of a friend who was a quilter that these where made. the portrait which you can't see very well is "Trapunto" A raised, dimensional surface created by putting additional batting or stuffing into areas to sculpt the surface. 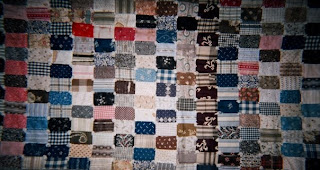 this is a family quilt made by Micheal's mother's maternal grandmother on a ranch in Texas ( i have spent a few years documenting about 47 family quilts, have identified the makers from both sides of the family it is an interesting collection) 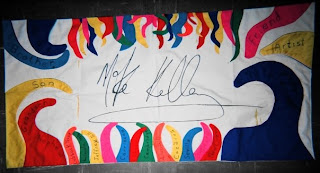 Here is the second of the "AIDS" quilts made for Micheal Kelley it was with scraps from this piece that I began "Somewhere, Anywhere, Nowhere" 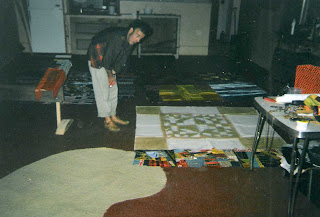 Having travelled with pieces of this quilt back and forth from Calgary to Toronto a few times, it was becoming larger and lager I suddenly had a deadline for an exhibition and had to find a place to lay it out and finish it. Fortunately I have to opportunity to house out side of Toronto that just happened to have a very large somewhat solid "Out Building to work in. 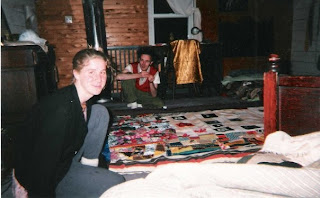 Moving back and forth between the house and the hall (the out building had been an Orange Man's Hall in its past) the quilt, which in spite of all the panels I considered it one piece, slowly with the help of friends came together This is Saskia Hummel.helping me based the top and bottom together before moving it to the quilt frame 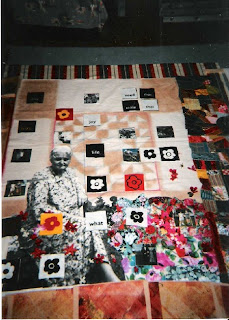 The quilt tops with their appliqué components came together. the main background is henna dyed canvas with the appearance of a nine patch. the side strip is 6 squares of "Crazy Quilt" and the floating smaller squares of text or images are reveres appliqué, thermal transfers 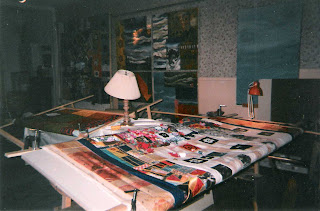 once the top was completed to my satisfaction especially my thermal transfers of real birch bark (from the trees on the property) on cotton to "frame" the first section. It went up on my home made quilting frame and friends, neighbours, other artist where invited ti drop and "stitch and bitch" 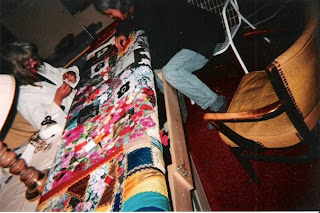 Quilting through out the fall and winter, in finger-less gloves, and wood burning in the stove it felt quite like a real old fashioned quilting experience. the people who help invested their time, their stories and trust in the process. "Somewhere, Nowhere, Anywhere" is a community piece.with Shelagh Young. 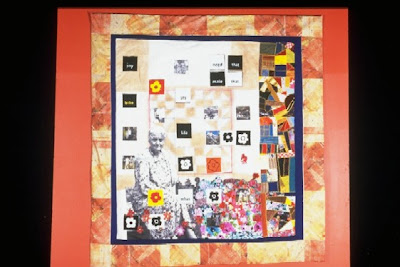 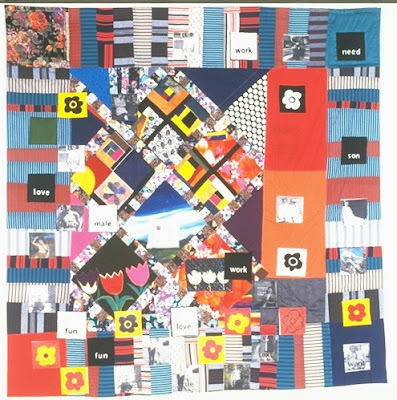 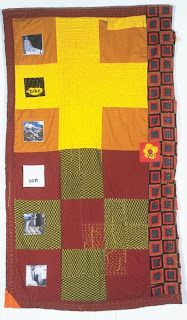 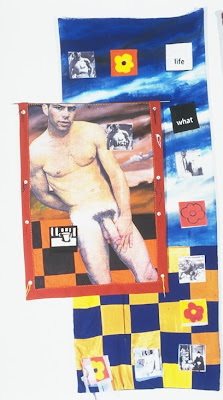 Panel 4 and 5 and here the facebook problems begin, well end really since this was the third image that was removed, and seems to have after I was able to get back into facebook and change the security setting on all of my albums to "Only Me" and I seemed to be blocked for another 24 hours. 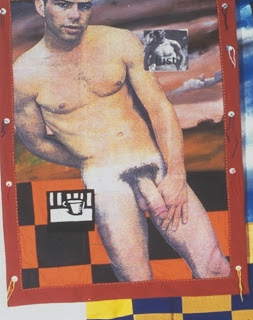 This close up of panel 5 was the fist to be removed from facebook. In the essay "Joe Lewis: Remembering Home" by Wendy Pearson that was written about this work for Artspace exhibition in 2001 Pearson wrote specifically of this image::

" At the same time, Joe does not forget that AIDS has wrought its own toll on gay men in the last two decades and these works cannot be viewed without calling to mind the memory of those we too have loved and lost. The male body that confronts us full-size on the quilt is both a sexual body, even if its genitalia is hidden by layerings of history and images that invite voyeuristic exploration by the viewer, and a vulnerable body. Sex and disease have strong, if poorly understood, associations for gay people; Joe’s work, like that of many gay men and lesbians who have lived in the shadow of AIDS, whether or not they are themselves HIV+, reminds us that the struggle today is both to celebrate life, home, family, and our sexuality and to resist the attempt to erase our lives and memories from a wider social understanding of what those words mean. In this sense, Joe’s work is both political and historical, activist and domestic, technologically sophisticated and hand-wrought simple. The messages he brings us in these works will speak differently to different people, but they will always, one can hope, remind us that the quilt brings comfort and warmth, a sense of family and home that everyone deserves and that some have lost simply because they spoke, as clearly as Joe in these works, of attachments, both loving and sexual, to people of the same sex. Perhaps works like Joe will help to bring about a utopian vision of a world in which gay people no longer lose their families—and their families no longer lose them." 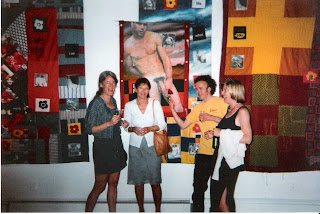 So much fro Utopia. The second image that was removed was this one taken at the Artspace opening in Peterborough  and was included more to show the scale of the work. Interesting the piece below has an image of a possibly naked woman yet it was not removed until I removed it along with the whole album and placed it here.

The 8" by 10" photo of my grandmother effectively made the move from quilting to Jacquard weaving with me. 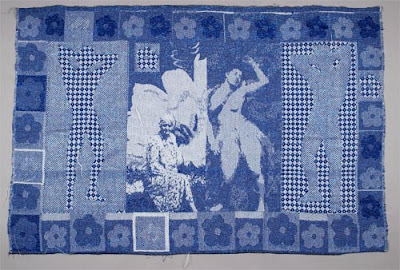 This piece was the result of the first jacquard workshop i did at the Montreal Centre for Contemporary Textiles with Louise Lemieux Bérubé. That was almost a decade ago.

http://www.textiles-mtl.com/ — with Montreal Centre for Contemporary Textiles.
Posted by Joe Lewis at 1:10 AM 0 comments